The familiar patterns of price bars that appear on technical indicators charts allow one to observe price trends. A certain trading instrument's historical price movements may be analyzed with these patterns, which can then be used to forecast the instrument's future price movements. The reader is expected to have prior knowledge of trendlines, continuing price changes, and reversal price patterns.

This article will discuss how to analyze the patterns after recognizing and studying the uncommon yet strong triple top and triple bottom patterns.

Triple peaks are made when three peaks move into the same region, with pullbacks in between, whereas triple bottoms are formed when three troughs are established, with rallies in between.

Triple tops and bottoms are a powerful warning to analytical traders that a trend reversal is imminent, although they are not often seen in day-to-day market trading.

In order to validate the reliability of the signal, chart shapes depicting the letters "M" or "W" should be used, but trends in trade volume also need to be considered.

When evaluating a price pattern and trying to forecast potential price movement, one of the most significant considerations is the pattern's longevity. Price patterns can be seen in any time frame, from the quick 144-tick chart to the 60-minute chart, the daily chart, the weekly chart, and the yearly chart. On the other hand, the importance of a pattern is frequently and directly tied to the size and depth of the pattern.

Longer-term patterns are usually more stable. When price finally breaks out of the pattern, it often does so with a larger extent of volatility. However, a pattern that builds on a daily chart is predicted to result in a greater move than the identical pattern witnessed on an hourly chart, such as a one-minute chart. A daily chart represents a more comprehensive view of price movements. The formation of a pattern on a monthly chart indicates a more significant price shift than the formation of an identical pattern on a daily chart.

Price patterns emerge when investors or traders grow used to purchasing and selling at specific levels. Consequently, the price fluctuates between these levels, forming patterns such as flags, pennants, and other patterns of a similar kind. When pricing eventually breaks out of a pattern, it often indicates a change in investor attitude. The longer the period, the greater the amount of effort that purchasers will have to exert to break above a region of opposition (and the greater the level of effort that selling will have to exert to break below an area of support), which will ultimately result in a more significant price change if the price does break in either direction. The weekly price chart of Alphabet Inc. (GOOG) in Figure 1 demonstrates the formation of a pennant price pattern. There was a significant price increase when the price continued on the previously defined path. In a similar way, the degree to which cost volatility inside a price pattern can be valuable in both the analysis of the validity of a pricing pattern and the prediction of the scale of the ultimate price breakout. The market's volatility measures the degree to which prices deviate from their average over time. Greater price variations are indicative of more volatility, which is a state that could be viewed as a more active conflict between the bears, who are trying to bring costs down, and the bulls, who are attempting to push prices higher. Higher-volatility patterns are more likely to be followed by significant price swings upon their eventual breakdown.

When the price moves more dramatically within the pattern, it might indicate that the bulls and bears are fighting a serious battle instead of just bickering. As volatility within the cost pattern increases, the expectation amount also increases. This leads to a more dramatic price move, which may even be explosive, as the price exceeds the level of support or resistance.

When trying to understand pricing trends, volume is another factor to consider. The term "volume" refers to the number of individual units of a certain trading instrument that have been traded and purchased over a given period. A trading instrument's volume is often represented as a histogram, a sequence of vertical lines under the price chart. When assessing its modern years, the volume provides the greatest insight. Modifications in the volume of purchasing and selling that are taking place may be examined by comparing them to previous activity and looking for patterns: An impending price change may be indicated by any volume activity that deviates from the usual in the market.

The resulting pricing move is more likely to be substantial if it occurs after the price breaks above or below a region of resistance or support. Accordingly, it is followed by a rapid rise in the attention of investors and traders, expressed in terms of volume. A rise in volume may be evidence that the price breakout is legitimate. On the other hand, a breakout that does not coincide with a discernible rise in volume has a far larger probability of failure since there is no excitement to support the move, especially if the move is to the upside.

Identify: The first thing you need to do to analyze price patterns correctly is to be able to recognize legitimate patterns in real-time. When looking at past data, the patterns are often simple to see. However, recognizing them as they develop might be more difficult. Traders and investors can practice recognizing patterns by examining previous data and paying careful attention to the approach utilized for constructing trendlines. Practice makes perfect. In each price bar, the date with the trends may be drawn using highs and lows, closing prices, or another data point.

Evaluate: The value of a pattern can be determined after it has been recognized. Investors and traders may use information about the pattern's persistence, supporting volume, and volatility to make informed decisions. Analyzing these factors might provide a better understanding of the reliability of the pricing pattern.

Forecast: Traders and investors can use the data to formulate a forecast or estimate future price fluctuations once the pattern has been recognized and examined. Furthermore, price patterns do not always coincide with one another, and seeing one does not in and of itself indicate that certain price action will take place. However, industry participants can watch for anticipated activity, enabling them to react quickly to shifting market conditions.

The double tops and bottoms can be extended to the triple tops and bottoms. In the same way, as two pushes up (in a double top) or two pushes down (in a double bottom) look like the cursive letters M and W, so do three pushes up (in a triple top) or three pushes down (in a triple bottom) (for a triple bottom). These price patterns represent many unsuccessful efforts to break through a region of resistance or support. The formation of a triple top happens when the cost makes three attempts to break above an established region of resistance, but each time it is unsuccessful, and prices begin to retreat. On the other hand, a triple bottom is when the price tries to break through a support level three times, but each time it is unsuccessful, the price bounces back up.

Creating a triple top is considered a bearish pattern since it causes an uptrend to be interrupted and ultimately leads to a shift toward the negative trend. The following steps contributed to its formation:

The price continues to rise until it reaches a point of resistance. At this point, it reverses direction and falls to a level of support.

The market retests the resistance levels but finds them too strong, retreating to the support zone.

In these price movements, buyers and sellers struggle to gain market share, with buyers trying to drive prices higher and sellers attempting to drive prices down. A reduction often follows each attempt to break through resistance levels in volume. This pattern continues until the price breaks through a support zone accompanied by a rise in participation and the volume corresponding to that participation. In most cases, after three tries to break thru a set resistance level have been unsuccessful, the buyers grow weary, the selling takes over, and the price declines, which results in a trend shift.

On the other hand, triple bottoms are regarded as bullish patterns because they halt a continuing steady decline and lead to a reversal of an upward trend. Price requires three failed tries to break through a region of support, which is the hallmark of the triple bottom price pattern. A decline usually follows each subsequent effort in volume. This pattern continues until the price eventually makes its last attempt to push down, fails, and then returns to go through a resistance level. Along with triple tops, this pattern suggests a conflict between buyers and sellers in the market. In this scenario, the sellers eventually wear themselves out, which opens the door for the purchasers to buck the trend that has been developing and emerge victorious with an upswing. In Figure 2, we see the development of a triple bottom on a daily chart of GOOG Alphabet-C stock. 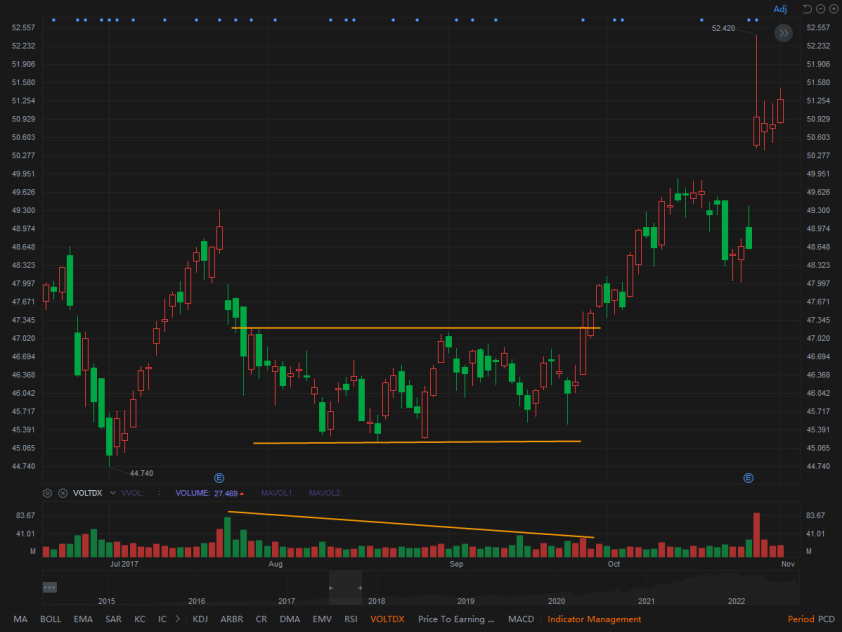 Price patterns may be seen in every time frame of charting, from the short intervals utilized by scalpers to the long ones employed by investors. Each pattern illustrates a struggle between purchasers and vendors. How the conflict is resolved may result in the continuance of an existing trend or the trend's complete reversal. Technical analysts may use price patterns to assist in evaluating historical and present market activity and forecasting future price movement, which can then be used to make judgments on investing and trading.