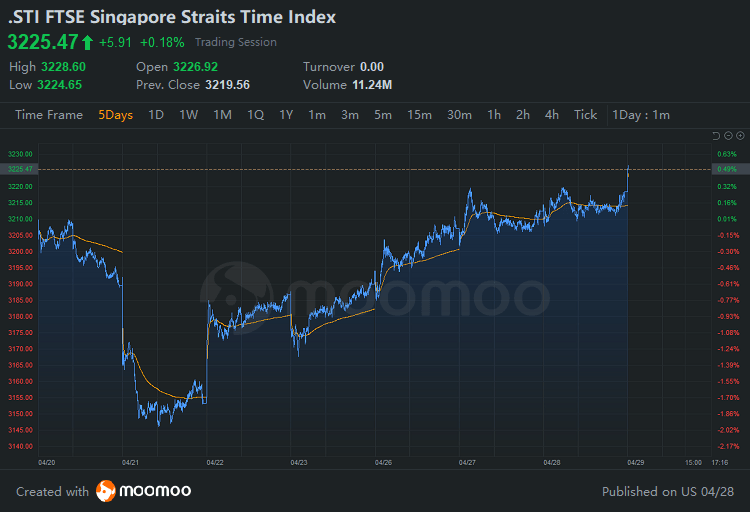 Singapore economic growth could surpass 6% in 2021, but disparate recovery expected across sectors : MAS

Singapore's economy may just stage a better-than-expected recovery this year, after posting its worst recession on record in 2020.

The Monetary Authority of Singapore (MAS) estimates that the republic's Gross Domestic Product (GDP) "could exceed" 6%, or the upper end of the official forecast range for this year, barring a setback in the global economic recovery.

$OLAM INTL(OLMIF.US)$: Through its wholly-owned subsidiary Olam Food Ingredients (OFI), the agri-food giant is proposing to buy US spice maker Olde Thompson at an enterprise value of US$950 million. The deal is expected to be earnings and margin accretive to OFI from the first year onwards. It may also generate potential earnings before interest, taxes, depreciation and amortisation synergies of US$20-30 million, said the group in its announcement on Thursday. Olam shares closed S$0.02 or 1.2 per cent higher at S$1.74 the day before.

$Aspen(1F3.SG)$: After retracting announcements that it had clinched a US$210 million gloves supply order from Honeywell, the group on Thursday issued a response to queries from the Singapore Exchange on why the agreement was "not consummated" by the American conglomerate - as well as the reason for Aspen announcing the retraction only 11 days after first announcing the agreement. Aspen ended Wednesday flat at 22.5 Singapore cents.

$Ascott Trust(HMN.SG)$: The trust posted a 10 per cent quarter-on-quarter increase to S$55 in its Q1 revenue per available unit of its properties under management contracts and management contracts with minimum guaranteed income, excluding rental housing and student accommodation properties. The counter closed at S$1.06 on Wednesday, up 1 per cent or S$0.01 prior to the business update.

$CDL HTrust(J85.SG)$: The trust posted a 19.1 per cent drop in net property income for Q1 2021 from Q4 2020, as travel restrictions continue to significantly impact the hospitality industry. Its overall portfolio recorded sharp declines in revenue per available room for hotels that were closed on a temporary basis or operating at very low occupancies. Its stapled securities closed 0.8 per cent or S$0.01 higher at S$1.27 on Wednesday prior to the announcement.

$Keppel DC Reit(AJBU.SG)$: The real estate investment trust (Reit) has signed a non-binding term sheet with telco M1 to establish a special purpose vehicle (SPV) to own and operate M1's network assets. M1 will be responsible to establish the SPV, which will acquire M1's current mobile, fixed and fibre assets for S$580 million in cash. Keppel DC Reit units closed flat at S$2.73 on Wednesday, before the announcement.

$ESR-REIT(J91U.SG)$: Its manager said on Wednesday that it is divesting its properties at 11 Serangoon North Avenue 5 and 3C Toh Guan Road East for S$53 million. The price is a 5 per cent premium to the properties' total fair value of S$50.5 million as at Dec 31, 2020, and a 7.1 per cent premium to their total acquisition price. Units of the Reit closed at 41.5 Singapore cents on Wednesday, up 0.5 cent or 1.2 per cent, prior to the announcement.

$Jiutian Chemical(C8R.SG)$: The chemicals company posted a net profit of 90.3 million yuan (S$18.5 million) for its first quarter ended March 31, more than 30 times that of its net profit of 2.9 million yuan for the corresponding period in the preceding year. The group's revenue increased 120 per cent year on year to 439.3 million yuan, from Q1 FY20's 199.4 million yuan. This was mainly attributed to an increase in both sales volume and average selling prices of its main products, dimethylformamide and methylamine, Jiutian said in a bourse filing on Wednesday. Shares of Jiutian Chemical ended Wednesday 0.2 Singapore cent or 1.96 per cent lower at 10 cents, before the results announcement.

$LHN(41O.SG)$: The mainboard-listed real estate services group has bought a 30-unit property at 115 Geylang Road for S$13.5 million. It made the purchase through its indirect wholly-owned subsidiary Emerald Properties, funding the S$675,000 deposit through internal sources. The remaining balance, to be paid on the completion date of July 21, 2021, will be funded by internal sources and bank borrowings. LHN shares closed at 23 Singapore cents on Wednesday, down 0.5 cent or 2.1 per cent prior to the announcement.