The market for Café de Coral Holdings Limited's (HKG:341) shares didn't move much after it posted weak earnings recently. We think that the softer headline numbers might be getting counterbalanced by some positive underlying factors.

Check out our latest analysis for Café de Coral Holdings 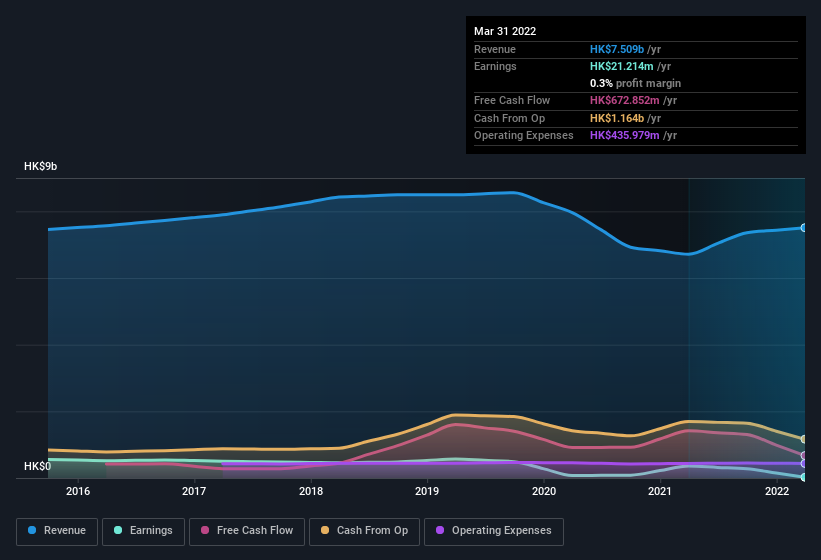 As finance nerds would already know, the accrual ratio from cashflow is a key measure for assessing how well a company's free cash flow (FCF) matches its profit. To get the accrual ratio we first subtract FCF from profit for a period, and then divide that number by the average operating assets for the period. The ratio shows us how much a company's profit exceeds its FCF.

That means a negative accrual ratio is a good thing, because it shows that the company is bringing in more free cash flow than its profit would suggest. While having an accrual ratio above zero is of little concern, we do think it's worth noting when a company has a relatively high accrual ratio. That's because some academic studies have suggested that high accruals ratios tend to lead to lower profit or less profit growth.

Over the twelve months to March 2022, Café de Coral Holdings recorded an accrual ratio of -0.29. That indicates that its free cash flow quite significantly exceeded its statutory profit. Indeed, in the last twelve months it reported free cash flow of HK$673m, well over the HK$21.2m it reported in profit. Café de Coral Holdings did see its free cash flow drop year on year, which is less than ideal, like a Simpson's episode without Groundskeeper Willie. Having said that, there is more to the story. We can see that unusual items have impacted its statutory profit, and therefore the accrual ratio.

How Do Unusual Items Influence Profit?

While the accrual ratio might bode well, we also note that Café de Coral Holdings' profit was boosted by unusual items worth HK$34m in the last twelve months. While we like to see profit increases, we tend to be a little more cautious when unusual items have made a big contribution. When we crunched the numbers on thousands of publicly listed companies, we found that a boost from unusual items in a given year is often not repeated the next year. Which is hardly surprising, given the name. Café de Coral Holdings had a rather significant contribution from unusual items relative to its profit to March 2022. All else being equal, this would likely have the effect of making the statutory profit a poor guide to underlying earnings power.

In conclusion, Café de Coral Holdings' accrual ratio suggests its statutory earnings are of good quality, but on the other hand the profits were boosted by unusual items. Given the contrasting considerations, we don't have a strong view as to whether Café de Coral Holdings's profits are an apt reflection of its underlying potential for profit. So if you'd like to dive deeper into this stock, it's crucial to consider any risks it's facing. Every company has risks, and we've spotted 2 warning signs for Café de Coral Holdings you should know about.

In this article we've looked at a number of factors that can impair the utility of profit numbers, as a guide to a business. But there are plenty of other ways to inform your opinion of a company. For example, many people consider a high return on equity as an indication of favorable business economics, while others like to 'follow the money' and search out stocks that insiders are buying. So you may wish to see this free collection of companies boasting high return on equity, or this list of stocks that insiders are buying.