Every strategy has at least one trigger symbol. Click "Start", and you’ll see it in the property bar on the right.

Note: The "Trigger Symbol1" here is just used as a reference. A real trigger symbol will be chosen in live trading or backtest later.

Click "Backtest" or "Live Trading", and then you can choose a real trigger symbol in the setting window as the "Trigger Symbol1" above.

One important role of the trigger symbol is to drive the cyclical running of the strategy. Therefore, you also need to set the interval between two rounds of running. 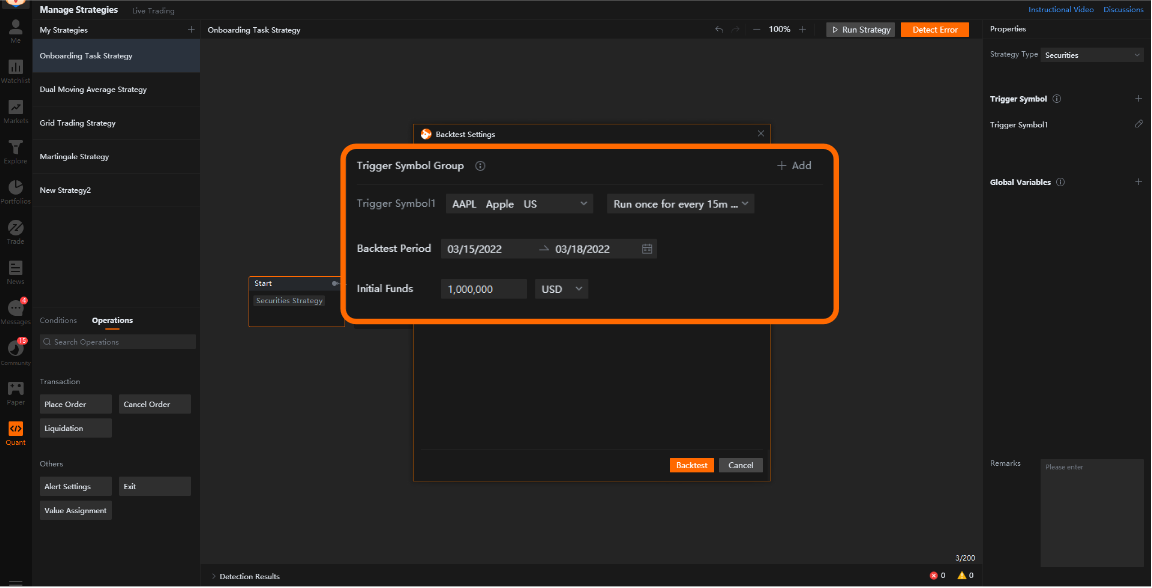 When building a strategy, we can set multiple trigger symbols on the canvas. 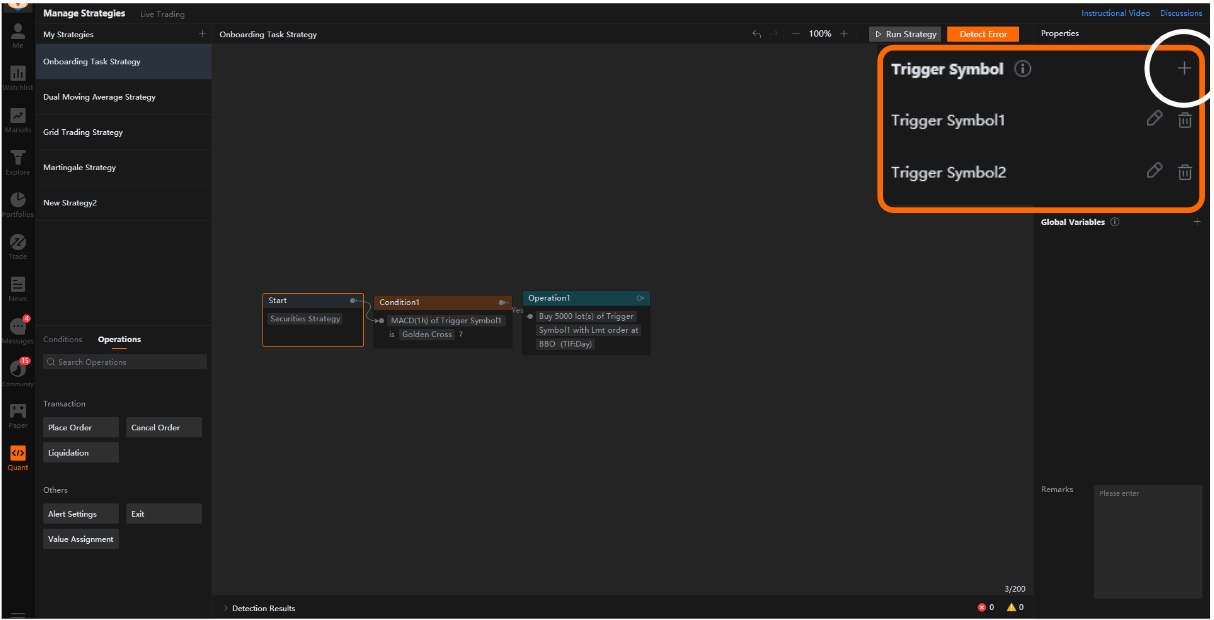 We can also add multiple trigger symbol groups in backtest or live trading. 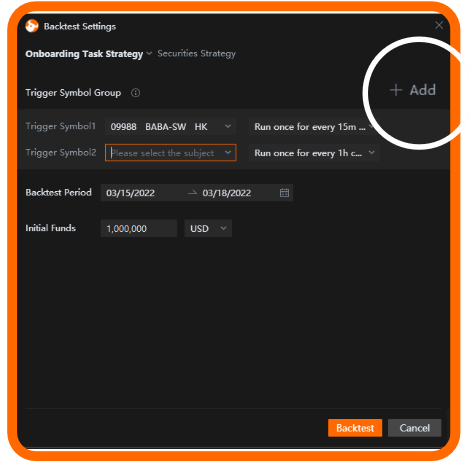 Taking the onboarding task strategy as an example, two trigger symbols are set in the "Start" box on the canvas. 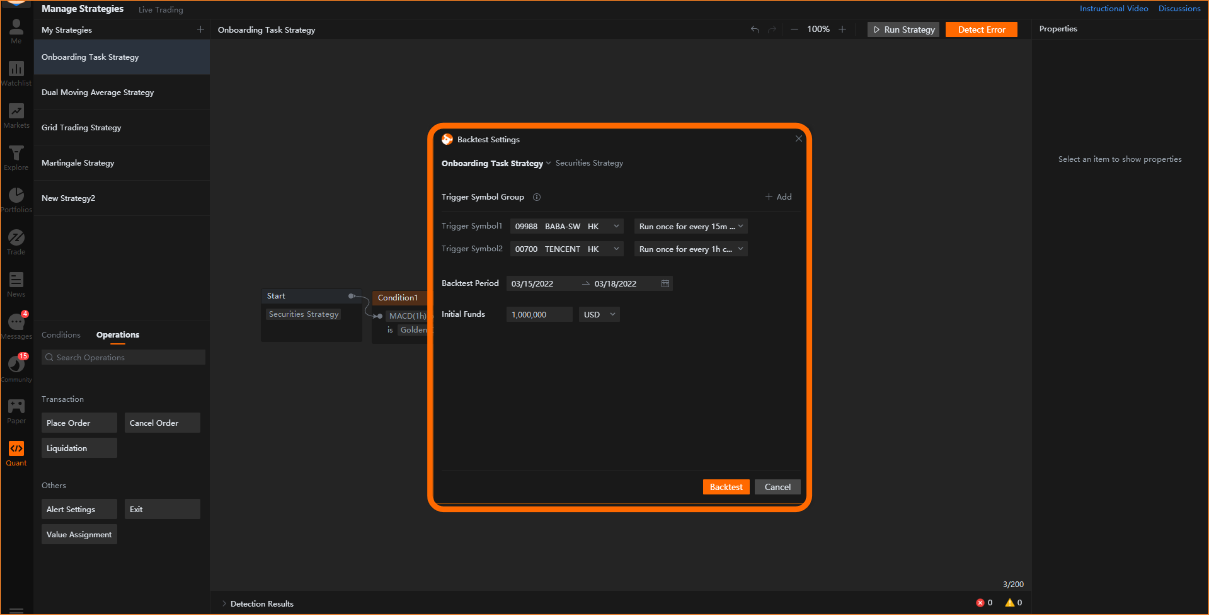 It indicates that the ticker of both Alibaba (09988.HK) and Tencent Holdings (00700.HK) will trigger the running of the onboarding task strategy.

If you add another trigger symbol group to the onboarding task strategy and assign the two trigger symbols as Apple (AAPL.US) and Google (GOOG.US) respectively, what will happen? 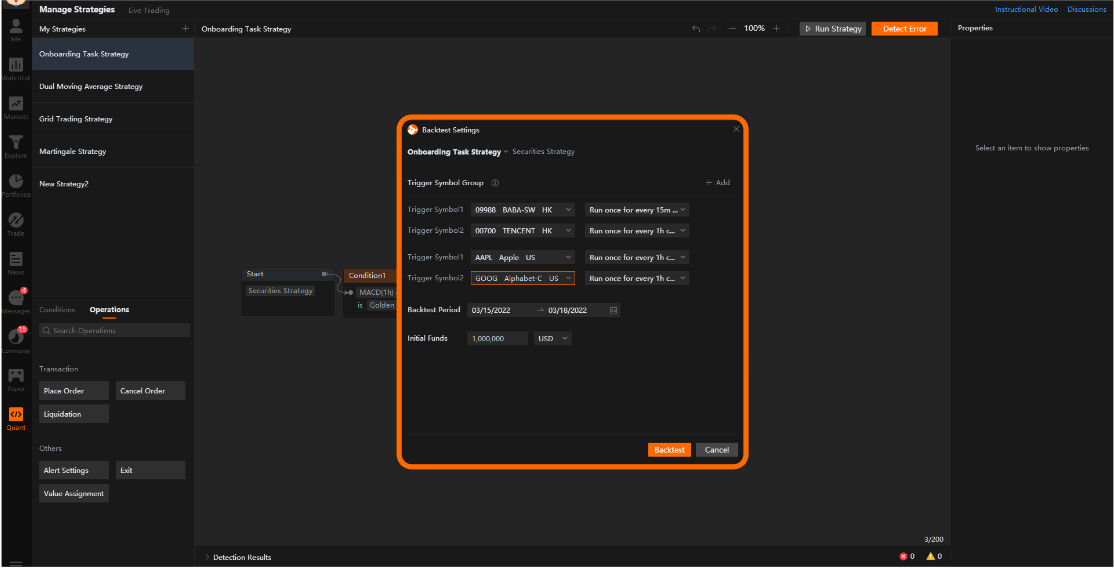 By setting multiple trigger symbol groups, you made a copy of the onboarding task strategy.

The original onboarding task strategy and the copy run in a relatively independent way, but they use the money (cash) and assets (stocks) in the same account (real account or backtest account).

We already know that trigger symbols drive a strategy (the content of the canvas) to runin cycles.

Taking the Martingale strategy as an example, the strategy runs once for every 1m candle during the market open of the HSI Future Main (HSImain.HK).

Then, in what order do the Conditions & Operations on the canvas run?

The strategy begins from 「Start」 and leads to 3 paths. The 3 paths run in an order from top to bottom and then from left to right (In the illustrative diagram, the running order of the 3 paths on the canvas is as follows: Path 1 > Path 2 > Path 3).

A path will not begin until the previous path runs to the end; that is to say, the paths run in series, instead of in parallel.

Moomoo is a professional trading app offered by Moomoo Technologies Inc.
Any illustrations, scenarios, or specific securities referenced herein are strictly for illustrative purposes. Past investment performance does not guarantee future results. Investing involves risk and the potential to lose principal.