Do you have it?  This commemorative badges, I am the 509th, how about you?First time buying, great experience.  I also have a better experience in stock investing because of moomoo.  I am also very happy that the subscription was successful.  Although the increase is not large, as long as we have confidence in the company, there will be many opportunities to make money in the future.  I also know more about your company's products and operations.  We can see that the comp... 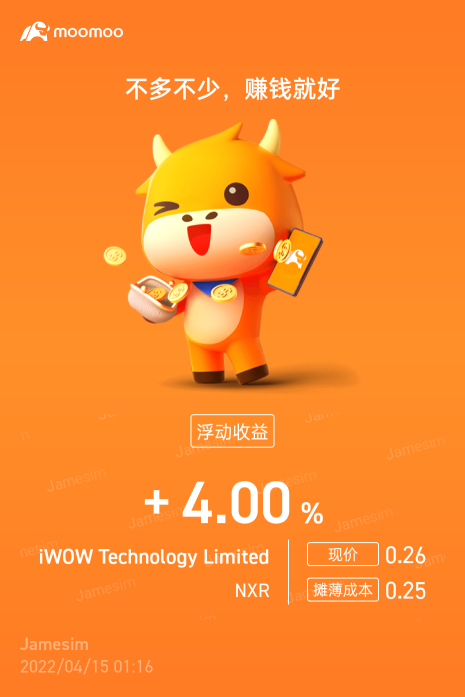 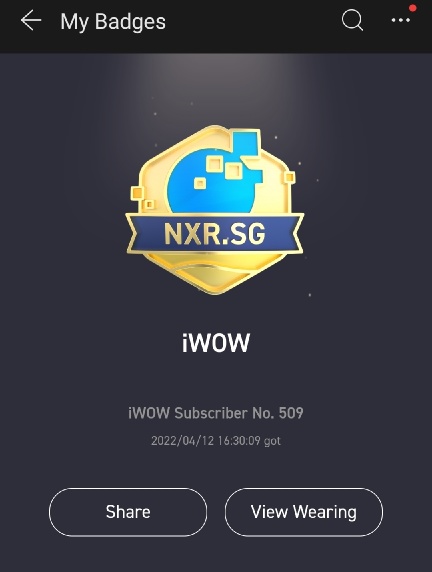 Hi,mooers! We are about to reveal the answers! Are you excited?

More than 200 mooers actively participated in our #15 Weekly Wins. Thank you for posting quality comments and sharing useful feedbacks for this guessing game!

[Answer Announcement]Here are the right but not the only answers for this game!1. $Apple(AAPL.US)$(Apple& Phone. The only answer.)2. $PayPal(PYPL.US)$ (It can be any online payment mode except f... 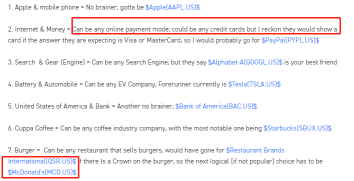 [What's New]$NESTLE SA(NSRGF.US)$, the manufacturer of KitKat and Nescafe, has warned that rising manufacturing costs would force it to raise prices. Nestle announced that it has already increased prices by 3.1 percent in the fourth quarter of its fiscal year.The food group's CEO, Mark Schneider, predicted that prices will rise this year, saying it was a "safe assumption."$RECKITT BENCKISER GROUP PLC(RBGPF.US)$, the parent company of Durex and Dettol, announced it will increase prices to meet raising operating expenses.Reckitt CEO Laxman Narasimhan said, "In 2022, we will use appropriate price and net revenue growth management initiatives to mitigate these headwinds and will continue to execute on our excellent efficiency program."Is inflation affecting the aforementioned firms' share prices in addition to raising their operational costs? Or does it have an impact amlost whole markets?

[Everyday Power]1. Inflation is a quantitative measure of how much the average price of a basket of selected goods and services in an economy has risen over time.2. The most commonly used inflation indexes are the Consumer Price Index (CPI)3. Inflation can be contrued as either a good or a bad thing, depending upon which side one takes.More investing basics will be offered in <Everyday Power>. Keep learning to be a master investor.

Welcome to Courses in the Moo Community, we hope you learn about it and leave your lovely comments.$Dow Jones Industrial Average(.DJI.US)$$Nasdaq Composite Index(.IXIC.US)$$S&P 500 index(.SPX.US)$ 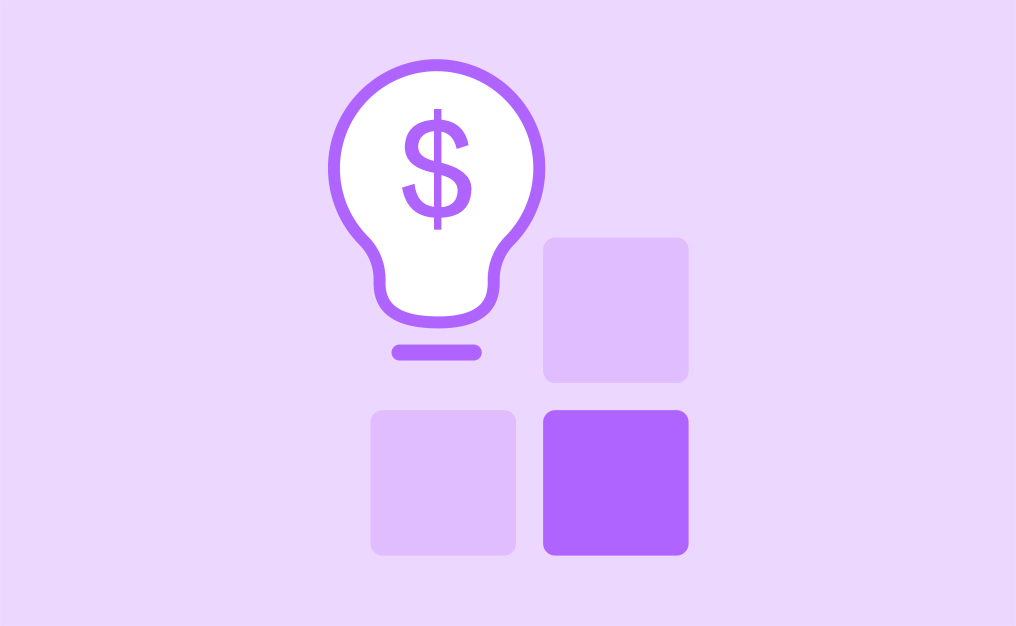 🥤How share value can be unlocked with earnings report

One of the golden rule of investing that I came across is the sure win strategy webminar conducted by a certain self proclaimed guru. The rule is simple, if the company announced increased profits this quarter compared to previous quarter or preceding quarters and if the stock trades at below PE 10, the share price will sure go up. Man, is this sure win strategy really works without evaluating its fundamental? Is there any ways to strike and buy the sure win lottery ticket?Is this strategy plausible, credible and believable? In fact, an estimation in the earnings expectations is complicated with more companies more attuned to playing the earnings game, trying to beat the earning expectations by those research bankers and analyts: using either earning management accounting or either operation discretion such as timing of capital on project outlays etc..The problem with this game is that the marketss will eventually catch on it and adjust the expectation. Using earnings is also a highly speculative strategy for short term. It is very hard to find a companies which has increasing earnings as business goes in cycle and has its own seasonality. Growth companies spend money on capex and its usually affect earnings. Even great companies such as $Coca-Cola(KO.US)$$NESTLE SA(NSRGF.US)$$Carlsberg A/S Sponsored ADR Class B(CABGY.US)$  do not have increasing profit every quarter. It may be perfect for short term strategy but as mentioned the market will catch up to its underlying intrinsic value.Know and understand the statistics or ratio etc. is definitely helpful in trading. But always be prudence and sceptical as there are thousands of investing rules out there. As Joel Greeblatt said before, "if you don't lose big money, most of the remaining alternative are good ones." Good luck to everyone out there and happy Halloween.

Dow futures fall slightly after the blue-chip average notches third winning week in a rowStock futures edged lower in overnight trading Sunday after the $Dow Jones Industrial Average(.DJI.US)$ notched its third positive week in a row at a record high. Dow futures dipped 50 points. S&P 500 futures and Nasdaq 100 futures both fell about 0.1%.Of the 117 companies in the $S&P 500 index(.SPX.US)$ that have reported earnings to date, 84% posted numbers that beat expectations, according to Refinitiv. S&P 500 companies are expected to grow profit by about 35% in the third quarter.Hedge funds slash Faang exposure to two-year low before earningsHedge funds that make both bullish and bearish wagers on stocks are turning skeptical on tech megacaps just days before earnings from the likes of $Apple(AAPL.US)$ and $Facebook(FB.US)$.Their exposure to the five biggest American companies slipped over the past month, hitting the lowest level in more than two years, according to Goldman Sachs's prime broker. Meanwhile, options traders -- who rushed in to bet on quick gains in 2020 -- are retreating. Total call open interest on that small group of U.S. giants sank to a 14-month low, data compiled by Bloomberg show. Smash-hit bitcoin ETF ups the ante for issuers racing to launchAter the stunning success of the $ProShares Bitcoin Strategy ETF(BITO.US)$ -- which accumulated more than $1 billion in assets in just days -- the stakes are higher than ever for the queue of issuers hoping to gain a foothold in the sector. Indeed, when the $Valkyrie Bitcoin Strategy ETF(BTF.US)$ debuted Friday, 3.1 million shares changed hands. That compares with the 24 million BITO shares traded at Tuesday's launch, which unleashed enthusiasm that helped send Bitcoin to record a day later.Shiba Inu up 50% to record, becomes 11th-biggest crypto coinShiba Inu soared to record highs over the weekend to become the 11th-biggest cryptocurrency by market value.SHIB, as it's known, was up 50% in the 24 hours through 10:10 a.m. New York time on Sunday, according to pricing from CoinGecko.com, and reached a record earlier in the day. Home prices rise, and single people are running out of houses to buyWith mortgage rates remaining low, plenty of singles are seeking homes. Often, they are scraping together down payments on their own, so they are looking for more affordable properties.Single people hoping to buy homes in the current housing market are short on options. The supply of entry-level housing, which Freddie Mac defines as homes up to 1,400 square feet, is near a five-decade low.Trump's social-media platform joins crowded conservative media fieldFormer President Donald Trump's planned digital-media venture could quickly become a serious competitor in a crowded field of right-leaning sites and social networks, thanks to Mr. Trump's prominence and online following.U.S. companies bet shoppers will keep paying higher pricesCorporate giants including $Procter & Gamble(PG.US)$, $NESTLE SA(NSRGF.US)$ and $Verizon(VZ.US)$ say they plan to continue raising prices or pushing customers to buy more expensive products into 2022 to offset fast-growing costs amid a global supply-chain crisis. Gillette razors, Nestlé coffee and Chipotle burritos are among the products that could get more expensive in coming months."We have not seen any material reaction from consumers," P&G finance chief Andre Schulten said last week, referring to a string of price increases that went into effect in September.Facebook confronts growth problems as number of young users in US declinesFor almost a decade, $Facebook(FB.US)$ has fretted over an existential problem: it is failing to attract young users in the US. Internal documents show that the number of US Facebook users under 30 is in decline and that Instagram, which has been phenomenally popular since being bought by Facebook in 2012 for $1bn, appears to be reaching the limits of its growth among younger users in key markets, raising serious questions about the company's future.Source: Bloomberg, WSJ, CNBC, Financial Times

Stocks selloff to extend to Asia as yields spikeA global equity selloff looked set to spill into Asia Wednesday after U.S. stocks saw their worst day since May and bond yields spiked on concerns about inflation. The dollar rallied.Futures declined about 1% in Japan and Australia, and were also lower in Hong Kong. Mounting concern over the debt-ceiling impasse in Washington added to investor angst.$S&P 500 index(.SPX.US)$contracts steadied in Asia trading after the benchmark closed 2% lower -- the most since May.Highest flying tech stocks fall hardest in rate-fueled routThe surge in yields batters growth stocks that have been trading at lofty levels. That's helped fuel a 2.9% drop in the$NASDAQ 100 Index(.NDX.US)$on Tuesday, led by companies like$Microsoft(MSFT.US)$and$Alphabet-A(GOOGL.US)$, as Treasury rates jumped for a fourth-straight day.The faster-growing companies are more sensitive to interest rates than others because their stock valuations hinge on revenue and profit that's not expected to emerge for years.Peloton extends drop as Amazon debuts rival fitness service$Peloton Interactive(PTON.US)$dropped as much as 5.5% on Tuesday following news that$Amazon(AMZN.US)$is providing a service called Halo Fitness to rival offerings from Peloton and$Apple(AAPL.US)$.Amazon's Halo membership includes “hundreds of workouts” through an app and can track body composition and sleep patterns, according to the company's website. Amazon is selling a Halo Band that works with the fitness service.Ford fortifies EV bet with four new factories in Tennessee and Kentucky$Ford Motor(F.US)$plans to build its first new U.S. assembly plant in decades, along with three battery factories, to fortify its push into electric vehicles as the industry accelerates green-tech investments.Ford expects to spend $7 billion on the project—the largest manufacturing investment in its history—and collaborate with South Korean battery maker SK Innovation to construct the battery facilities.Alibaba apps are starting to support Tencent's WeChat PayFor years, China's major internet platforms have operated as walled gardens, blocking links from rivals or not allowing users to purchase goods using competitors payments products.Regulators are now forcing companies like$TENCENT(00700.HK)$and$Alibaba(BABA.US)$to change some of their anti-competitive behavior across their apps. Tencent has started unblocking links to rivals’ content on WeChat. And Alibaba is now integrating Tencent's WeChat Pay on some of its apps.Tesla CEO Elon Musk says U.S. government should avoid regulating crypto$Tesla(TSLA.US)$ chief Elon Musk on Tuesday said the U.S. government should steer clear of trying to regulate the crypto market. "It is not possible to, I think, destroy crypto, but it is possible for governments to slow down its advancement," Musk said at the Code Conference in Beverly Hills, California.Soaring pea costs set to hit plant-based meat producersPlant-based meat companies that rely on the pea as a key ingredient are set to be hit by the severe drought in Canada this year that has led to soaring crop prices, a leading supplier has warned. Prices of peas in Canada have more than doubled.Following$Beyond Meat(BYND.US)$, food companies including$Tyson Foods(TSN.US)$and$NESTLE SA(NSRGF.US)$have turned to peas as their key ingredient for their plant-based meat. Nestlé this year also launched a plant milk made from yellow peas.China's pet care spend set for dramatic increase, says GoldmanGoldman Sachs is urging investors to take a bet on China’s $30bn pet market and the prospect that the country’s city-dwelling youth will opt for well-fed cats and dogs over a new baby boom.The US investment bank has laid out its case for the Chinese pet care market in a report that forecasts a stellar 19% compound annual growth in pet food spending between now and 2030 as, among other factors, the diet of China‘s nearly 200m cats and dogs shifts from leftovers to packaged pet food.Source: Bloomberg, WSJ, CNBC, Financial Times

Brian Rosa
wrote a post · 09/10/2021 18:23
The CEO of $NESTLE SA(NSRGF.US)$ tells CNBC that sustainability concerns among its younger customers are “off the charts.”Mark Schneider’s comments come as the world gears up for the COP26 climate change summit in Glasgow, Scotland.
3779 Views
Like
Comment
Share