Daimler Truck Gains in Debut After Historic Split From Mercedes

$MERCEDES-BENZ GROUP AG(DDAIF.US)$$DAIMLER AG ADR(DMLRY.US)$Daimler AG's trucks division gained in its first trading day as the storied German manufacturer completed a historic spinoff to better face sweeping changes in the auto industry.Daimler Truck Holding AG rose as much as 7% after opening at 28 euros, valuing the company at around 24 billion euros ($27 billion). While that’s below Bloomberg Intelligence’s range of as much as 31 billion euros, the company is still in contention to join Germany’s benchmark DAX index, being worth more than current members Deutsche Bank AG and utility RWE AG.The truckmaker and Daimler’s Mercedes-Benz cars unit expect their split to enable the two to move more quickly toward an electrified and autonomous future. Their breakup ends more than a century of the businesses running under one roof, with Daimler retaining only a minority stake in its former commercial-vehicle division.Investors expect that one of Germany’s largest spinoffs in recent years will lead to more transparency and accelerate Daimler Truck’s restructuring in Europe, where high costs are squeezing returns. 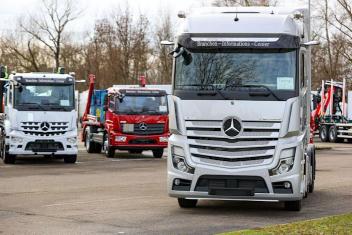 $Rivian Automotive(RIVN.US)$ Rivian has just started production and deliveries, with total deliveries reaching 156 units of the R1T pickup by the end of October, planning to reach 1,000 units of deliveries by year end on production of 1,200 units. Production of the R1S, the SUV, is expected to commence in December with deliveries this year minimal to none. Production is scaling fairly slowly under those targets, from 180 units per month up to a projected ~400-500 units by December, given those targets.Volumes will need to scale significantly over the next four quarters as the company has "55,400 R1T and R1S preorders in the United States and Canada from customers." Rivian intends to fill out this delivery backlog by 2023, implying substantial growth in volumes from ~1,000 in 2021 to an estimated ~20,000 in 2022. Rivian's launch of both vehicles has continued to be delayed and the company's "production ramp is taking longer than originally expected due to a number of reasons," which could impact the timeframe for those stated deliveries and lead to pre-order cancellations because of the long wait time.Rivian does believe that this order backlog and Amazon's commitment provide predictable growth and accelerated scaling of volumes, with equipped capacity of 150,000 units currently. Factory expansion is expected to boost capacity to 200,000 units by 2023, but Rivian does not expect to achieve near-max capacity production run rates until 2024. While this does represent impressive scaling alongside potential opportunities of growth in new R1 models planned to be launching as part of a broadening lineup, a solid proportion of that near-term capacity is committed to Amazon - potentially up to 40,000 units/year by 2024.At an ASP of $70,000 to $75,000 for the consumer vehicles, Rivian has $3.9-$4.1 billion in revenues represented cumulatively through 2023, assuming that it does not lose a substantial amount of pre-orders and can meet that conditional ~55,000 unit volume. The EDV, for Amazon's order, has no stated pricing yet, but will be priced on volume, which could contribute lower margins while boosting revenues.On the commercial side, Amazon's order is it. That's all Rivian can do for the moment - the company is "unable to serve additional last mile delivery customers beyond Amazon" until 2025 following exclusivity period expiry, or potentially up to 2027 should Amazon trigger its ROFR clause in the agreement. This opens up the door for competition including Mercedes $MERCEDES-BENZ GROUP AG(DDAIF.US)$ eSprinter, GM's Brightdrop, Ford's eTransit, and smaller startups like Bollinger and $Canoo(GOEV.US)$ to pursue sales before 2025. $Arrival(ARVL.US)$ does pose a threat, but like Rivian, is committing most of its launch volume to $United Parcel Service(UPS.US)$. While 100,000 units is a massive starting point for the commercial business, apart from international expansion, the period of exclusivity gives competition time to scale and pressure growth.Amazon's 100,000 unit order the primary outlet of growth through 2025 is expected to book a majority of Rivian's revenues. So, some potential for revenue growth stems from Rivian's ability to grow its order book in consumer vehicles, with current preorders representing close to $4 billion in revenues by 2023 assuming no cancellations. Expanding production can aid consumer vehicle growth and revenues over this time frame, should Rivian be able to reach annual production volumes of ~100,000 units of consumer vehicle volume by 2025.
EV leader or follower: will Rivian beat this IPO season?
18
3 Comments · 69K Views
Like
Comment
Share

ColumnTesla's success is exciting, but they are still an automotive manufacturer that

$Tesla(TSLA.US)$I don't hate TSLA or growth companies; what I hate is paying too much for growth. TSLA is doing all the right things, their revenue, net income, and free cash flow are growing considerably, but at today's levels, investors are paying way too much for TSLA's future growth as a tremendous amount is priced in. A report came out the other day where Bernstein went on a fact-finding mission. Their firm determined that 99% of global car sales originated from traditional auto OEMs. Internal combustion engines accounted for 97%, while battery electric vehicles came in at 2%. The most interesting thing about the report was that the top 15 OEMs had a collective market cap of $1.2 trillion while the pure-play EV companies, with TSLA at the helm, had a collective market cap of $1.1 trillion, yet they sell 1% of all cars today.Currently, TSLA has a market cap of $890.5 billion while the combination of$Ford Motor(F.US)$,$General Motors(GM.US)$,$Toyota Motor(TM.US)$,$VOLKSWAGEN A G(VWAGY.US)$,$BAYER MOTOREN WERK(BMWYY.US)$,$Honda Motor(HMC.US)$and$MERCEDES-BENZ GROUP AG(DDAIF.US)$have a combined market cap of $746.62 billion. TSLA in the TTM has generated $46.85 billion in revenue, $3.47 billion in net income, and $2.57 billion in FCF, while the combined entity of F, GM, VWAGY, BMWYY, TM, HMC, and DDAIF generated $1.13 trillion in revenue, $102.27 billion in net income, and $79.51 billion in FCF. People who are investing in TSLA today are paying too much for their growth. It's perplexing, and the numbers don't make sense. By these numbers, TSLA would need to increase their revenue by $1.08 trillion (2,316%), net income by $98.8 billion (2,849%), and their FCF by $76.95 billion (2,997%) to equal what these companies are producing currently, yet TSLA's market cap is $143.88 billion larger than these companies combined. There is no justification for TSLA's market cap, and all of the innovative ways they are potentially going to generate revenue from aren't filling this void anytime soon. The premium on TSLA's growth is dangerous, and there isn't a single logical justification that has been made to support their market cap.TSLA has a current P/S of 18.48 ($892.28 / $48.28 (revenue per share)) and a current EPS of 249.94 ($892.28 / $3.57). TSLA is in the middle of the pack as its net income conversion ratio is 7.4%. I know what the bulls are going to say, TSLA is growing more than everyone else, and I don't understand growth. I have a question, are they? I used many companies here, but let's look at just VWAGY for a one-to-one comparison. TSLA has increased its total revenue by $39.85 billion over the past five years and it's grown from $7 billion to $46.85 billion in the TTM. I admit that's incredible, but so is what VWAGY did. In the same period, VWAGY has increased its revenue by $55.78 billion as it went from $195.79 billion to $251.56 billion. Sure, TSLA has a much higher percentage from a percentage base, but VWAGY, as an established company, grew by more than $8.2 billion over the same period. The same goes for net income, as VWAGY saw its net income increase by $15.94 billion over the past five years while TSLA's increased by $4.14 billion. VWAGY has a 13% ROE ratio, while TSLA's is 12.17%. VWAGY saw its FCF increase by $33.71 billion in the last five years while TSLA's grew by $3.88 billion, yet VWAGY trades at a 4.6x price to FCF multiple while TSLA's multiple is 346.9x. Mr. Market has also placed a 0.83x value on VWAGY's equity regarding its market cap, while TSLA trades at 31.25x. The kicker is that TSLA has diluted shares as they have increased the amount of TSLA shares outstanding by 23.45%, and VWAGY has done all of this while keeping outstanding shares the same. TSLA's market cap is $753.49 billion larger than VWAGY, and if you think VWAGY is standing still in the EV market, they aren't.TSLA's valuation doesn't work, and it's not justifiable as an automotive company. 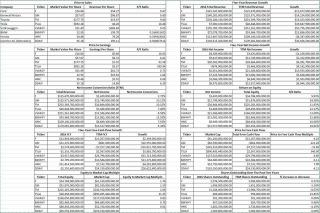