What Is Return On Equity (ROE)? 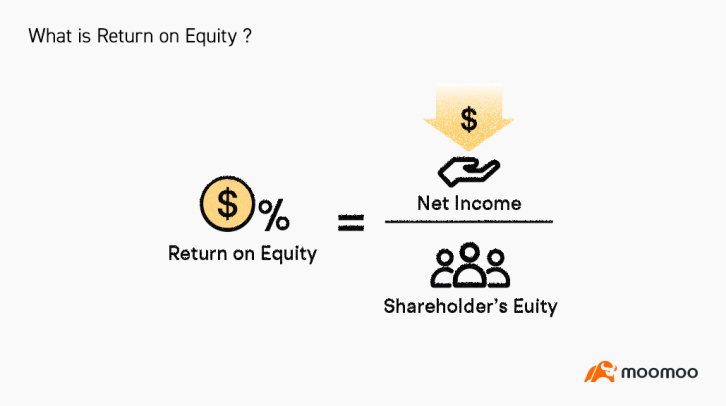 Return on Equity (ROE) refers to a financial ratio that indicates how profitable a company is relative to its shareholders' equity.

ROE is calculated by dividing a firm's net income by the average of its shareholders' equity for a given period(usually in an annual period). Expressed as a percentage, ROE can be calculated for any company if its net income and equity are both positive numbers.

Its formula can be expressed as:

ROE is considered the return on net assets since shareholders' equity is equal to a company's assets minus its liabilities.

ROE can be used to measure how efficiently a company utilizes its equity to generate profit. Generally speaking, the higher the ROE, the better.

But a high ROE might not always be a good thing. An outsized ROE might indicate some problems—such as inconsistent profits or excessive debt. Also, a negative ROE due to the company having a net loss or negative shareholders' equity is not a helpful metric to analyze the firm, nor can it be compared against companies with a positive ROE.

Relatively high or low ROE ratios will vary significantly from one industry group or sector to another. Therefore, a company's ROE must be compared with that of its peers in the same industry.

Example of Return on Equity (ROE)

Below is the balance sheet from Apple's 10K statement showing the total shareholders' equity for the fiscal years ended September 25, 2021 and September 26, 2020. Below is the income statement for the fiscal year 2021 (for the year ended September 25, 2021) of Apple according to its10K statement: This means that for every dollar of shareholders' equity during 2021, Apple generated 1.47(rounded) dollars in profit.

Return on Assets (ROA) vs. Return on Equity (ROE)

Both ROA and ROE measure how efficiently the company generates its profits. However, whereas ROE compares net income to the company's net assets, ROA refers to its net income relative to its assets in total, without deducting its liabilities.

ROA factors in how leveraged a company is or how much debt it carries. After all, its total assets include any capital it borrows to run its operations. On the other hand, ROE only measures the return on a company's equity, which leaves out its liabilities.