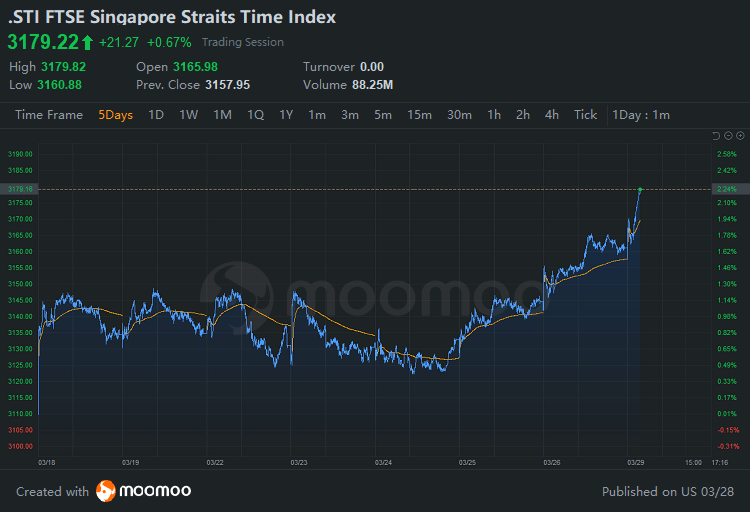 Ascendas India Trust to acquire two IT buildings in Bangalore for 14.41b rupees

$Ascendas-iTrust(CY6U.SG)$ will spend about 14.41 billion rupees (S$268.2 million) to acquire two buildings in an IT park located in Hebbal, Bangalore, as part of a forward purchase agreement with Gardencity Realty.

The total purchase consideration depends on certain factors, including final rentals achieved, the trustee-manager said in a bourse filing on Monday.

The two buildings are part of a project comprising three buildings spread across two land parcels with an aggregate net leasable area (NLA) of about 2.26 million square feet (sq ft).

Spanning an area of 593 square kilometres, the project with a 1.4 gigawatt (GW) capacity will power approximately 1.2 million UK homes with clean and renewable energy. This will make Sofia one of the largest wind farms in the world once the project is completed, Sembmarine said in a press statement on Monday.

$Ascendas-iTrust(CY6U.SG)$: The manager said on Monday that a-iTrust will spend about 14.41 billion rupees (S$268.2 million) to acquire two buildings in an IT Park in Hebbal, Bangalore. The trust will also provide funding for the development of the project as part of the forward purchase arrangement. a-iTrust units closed flat at S$1.47 on Friday.

$Sembcorp Marine(S51.SG)$: On Monday the marine and offshore engineering group said it, together with GE Renewable Energy's Grid Solutions, has clinched a contract worth £600 million (S$1.12 billion), to supply the high voltage direct current electrical system for RWE Renewables' UK-based Sofia Offshore Wind Farm. Sembmarine shares closed up at 1.9 per cent or 0.3 Singapore cent at 16.2 cents on Friday.

$Tianjin ZX USD(T14.SG)$: After calling for a trading halt on Friday morning, the group announced that a "chain offer" was triggered for the remaining shares of Tianjin Zhong Xin Pharmaceutical Group, on both the Singapore and Shanghai bourses, that are not held by offeror Tianjin Pharmaceutical Singapore International Investment and Chinese conglomerate Tianjin Pharmaceutical Holdings (TPH). This follows a transfer of a two-thirds ownership in TPH to a third party. Tianjin Zhong Xin requested to lift its trading halt on Monday.

$DBS(D05.SG)$: Singapore's largest bank on Friday said it was appointing senior civil servant Chng Kai Fong as a new non-executive director to the boards of DBS Holdings and DBS Bank, effective March 31. Mr Chng is the managing director of Singapore Economic Development Board. Shares of DBS closed on Friday's at S$28.59, up S$0.09 or 0.3 per cent, before the announcement.

$IFAST(AIY.SG)$: The wealth management fintech platform's wholly-owned Malaysian unit, iFast Capital Sdn Bhd, has announced the launch of its stocks and exchange-traded funds brokerage services on FSMOne.com in Malaysia. Shares of iFast closed 1.3 per cent or S$0.08 lower at S$5.94 on Friday.

$Nanofilm(MZH.SG)$: The tech unicorn, with Temasek Holdings as a substantial shareholder, has been included into the FTSE ST Large & Mid Cap Index and the FTSE ST Mid Cap Index with effect from March 22, 2021. This follows the company's inclusion in the FTSE ST China Index and FTSE ST Shariah Index on Dec 21, 2020. The counter rose 1 per cent or S$0.05 to close at S$4.91 on Friday.

$Hong Leong Asia(H22.SG)$: The industrial conglomerate has assigned the shareholders' loan and other advances it previously granted to its consumer products unit - the Xinfei companies currently undergoing restructuring - to a buyer in China specialising in the acquisition of non-performing assets, for 48.7 million yuan (S$10 million). The counter was down 0.7 per cent or 0.5 Singapore cent to 77 cents at Friday's close.

Source: The Business Times, The Edge