Howard Marks put it nicely when he said that, rather than worrying about share price volatility, 'The possibility of permanent loss is the risk I worry about... and every practical investor I know worries about.' When we think about how risky a company is, we always like to look at its use of debt, since debt overload can lead to ruin. Importantly, Longfor Group Holdings Limited (HKG:960) does carry debt. But is this debt a concern to shareholders?

When Is Debt A Problem?

Debt assists a business until the business has trouble paying it off, either with new capital or with free cash flow. Part and parcel of capitalism is the process of 'creative destruction' where failed businesses are mercilessly liquidated by their bankers. While that is not too common, we often do see indebted companies permanently diluting shareholders because lenders force them to raise capital at a distressed price. Of course, the upside of debt is that it often represents cheap capital, especially when it replaces dilution in a company with the ability to reinvest at high rates of return. When we examine debt levels, we first consider both cash and debt levels, together.

What Is Longfor Group Holdings's Debt? 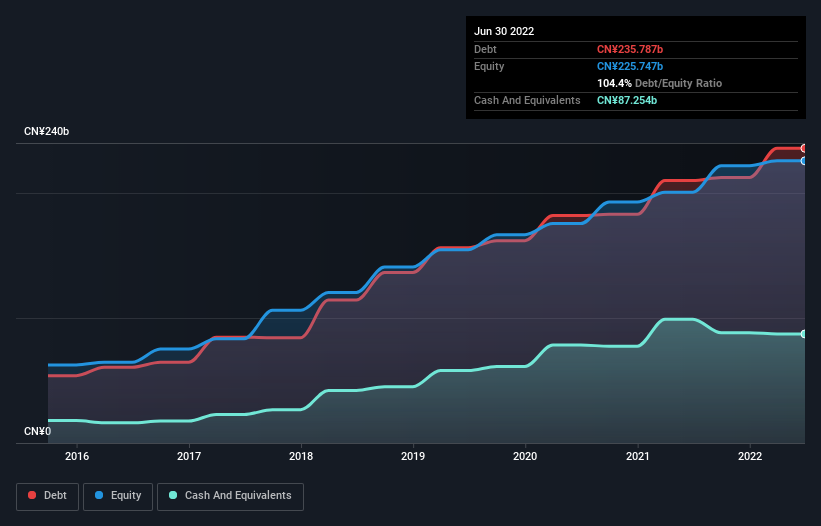 This deficit casts a shadow over the CN¥128.5b company, like a colossus towering over mere mortals. So we definitely think shareholders need to watch this one closely. At the end of the day, Longfor Group Holdings would probably need a major re-capitalization if its creditors were to demand repayment.

Longfor Group Holdings has a debt to EBITDA ratio of 3.3, which signals significant debt, but is still pretty reasonable for most types of business. But its EBIT was about 1k times its interest expense, implying the company isn't really paying a high cost to maintain that level of debt. Even were the low cost to prove unsustainable, that is a good sign. One way Longfor Group Holdings could vanquish its debt would be if it stops borrowing more but continues to grow EBIT at around 10%, as it did over the last year. When analysing debt levels, the balance sheet is the obvious place to start. But ultimately the future profitability of the business will decide if Longfor Group Holdings can strengthen its balance sheet over time. So if you want to see what the professionals think, you might find this free report on analyst profit forecasts to be interesting.

Finally, a company can only pay off debt with cold hard cash, not accounting profits. So the logical step is to look at the proportion of that EBIT that is matched by actual free cash flow. Over the most recent three years, Longfor Group Holdings recorded free cash flow worth 78% of its EBIT, which is around normal, given free cash flow excludes interest and tax. This cold hard cash means it can reduce its debt when it wants to.

While Longfor Group Holdings's level of total liabilities has us nervous. To wit both its interest cover and conversion of EBIT to free cash flow were encouraging signs. We think that Longfor Group Holdings's debt does make it a bit risky, after considering the aforementioned data points together. That's not necessarily a bad thing, since leverage can boost returns on equity, but it is something to be aware of. There's no doubt that we learn most about debt from the balance sheet. But ultimately, every company can contain risks that exist outside of the balance sheet. For instance, we've identified 4 warning signs for Longfor Group Holdings (1 can't be ignored) you should be aware of.

If you're interested in investing in businesses that can grow profits without the burden of debt, then check out this free list of growing businesses that have net cash on the balance sheet.