Riverine China Holdings Limited (HKG:1417) shareholders won't be pleased to see that the share price has had a very rough month, dropping 27% and undoing the prior period's positive performance. Instead of being rewarded, shareholders who have already held through the last twelve months are now sitting on a 38% share price drop.

Even after such a large drop in price, given close to half the companies in Hong Kong have price-to-earnings ratios (or "P/E's") below 8x, you may still consider Riverine China Holdings as a stock to avoid entirely with its 16.7x P/E ratio. Although, it's not wise to just take the P/E at face value as there may be an explanation why it's so lofty.

For example, consider that Riverine China Holdings' financial performance has been poor lately as it's earnings have been in decline. One possibility is that the P/E is high because investors think the company will still do enough to outperform the broader market in the near future. If not, then existing shareholders may be quite nervous about the viability of the share price. 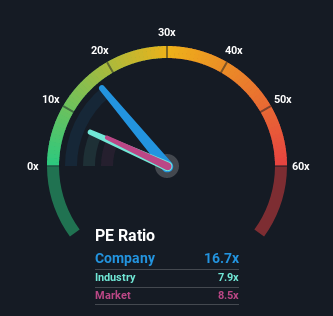 SEHK:1417 Price Based on Past Earnings September 29th 2022 We don't have analyst forecasts, but you can see how recent trends are setting up the company for the future by checking out our free report on Riverine China Holdings' earnings, revenue and cash flow.

There's an inherent assumption that a company should far outperform the market for P/E ratios like Riverine China Holdings' to be considered reasonable.

If we review the last year of earnings, dishearteningly the company's profits fell to the tune of 21%. Regardless, EPS has managed to lift by a handy 22% in aggregate from three years ago, thanks to the earlier period of growth. Although it's been a bumpy ride, it's still fair to say the earnings growth recently has been mostly respectable for the company.

Weighing that recent medium-term earnings trajectory against the broader market's one-year forecast for expansion of 20% shows it's noticeably less attractive on an annualised basis.

In light of this, it's alarming that Riverine China Holdings' P/E sits above the majority of other companies. Apparently many investors in the company are way more bullish than recent times would indicate and aren't willing to let go of their stock at any price. There's a good chance existing shareholders are setting themselves up for future disappointment if the P/E falls to levels more in line with recent growth rates.

A significant share price dive has done very little to deflate Riverine China Holdings' very lofty P/E. It's argued the price-to-earnings ratio is an inferior measure of value within certain industries, but it can be a powerful business sentiment indicator.

Our examination of Riverine China Holdings revealed its three-year earnings trends aren't impacting its high P/E anywhere near as much as we would have predicted, given they look worse than current market expectations. Right now we are increasingly uncomfortable with the high P/E as this earnings performance isn't likely to support such positive sentiment for long. Unless the recent medium-term conditions improve markedly, it's very challenging to accept these prices as being reasonable.

You need to take note of risks, for example - Riverine China Holdings has 2 warning signs (and 1 which shouldn't be ignored) we think you should know about.

You might be able to find a better investment than Riverine China Holdings. If you want a selection of possible candidates, check out this free list of interesting companies that trade on a P/E below 20x (but have proven they can grow earnings).