We Think Coca-Cola FEMSA. De (NYSE:KOF) Can Stay On Top Of Its Debt

Legendary fund manager Li Lu (who Charlie Munger backed) once said, 'The biggest investment risk is not the volatility of prices, but whether you will suffer a permanent loss of capital.' So it seems the smart money knows that debt - which is usually involved in bankruptcies - is a very important factor, when you assess how risky a company is. We note that Coca-Cola FEMSA, S.A.B. de C.V. (NYSE:KOF) does have debt on its balance sheet . But should shareholders be worried about its use of debt?

What Risk Does Debt Bring?

Debt and other liabilities become risky for a business when it cannot easily fulfill those obligations, either with free cash flow or by raising capital at an attractive price. Part and parcel of capitalism is the process of 'creative destruction' where failed businesses are mercilessly liquidated by their bankers. While that is not too common, we often do see indebted companies permanently diluting shareholders because lenders force them to raise capital at a distressed price. Of course, debt can be an important tool in businesses, particularly capital heavy businesses. When we examine debt levels, we first consider both cash and debt levels, together.

How Much Debt Does Coca-Cola FEMSA. de Carry?

The chart below, which you can click on for greater detail, shows that Coca-Cola FEMSA. de had Mex$83.3b in debt in June 2022; about the same as the year before. On the flip side, it has Mex$45.6b in cash leading to net debt of about Mex$37.7b. 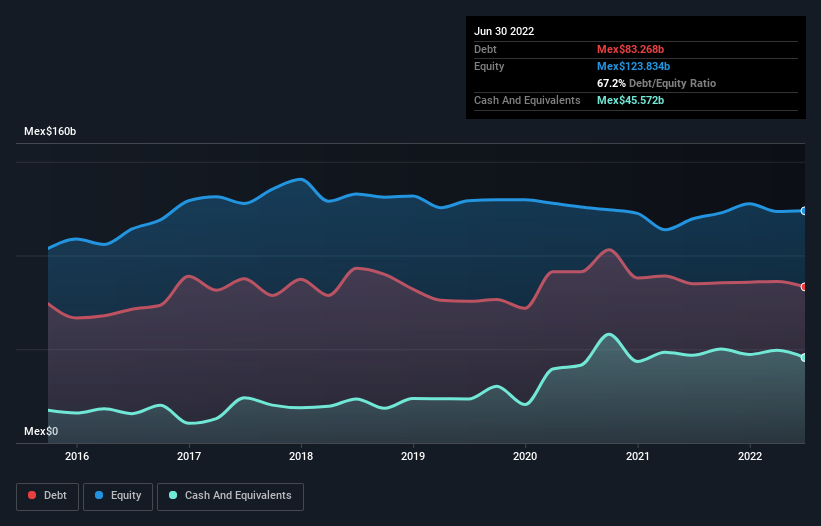 Coca-Cola FEMSA. de has a very large market capitalization of Mex$245.7b, so it could very likely raise cash to ameliorate its balance sheet, if the need arose. But it's clear that we should definitely closely examine whether it can manage its debt without dilution.

Looking at its net debt to EBITDA of 1.0 and interest cover of 5.8 times, it seems to us that Coca-Cola FEMSA. de is probably using debt in a pretty reasonable way. So we'd recommend keeping a close eye on the impact financing costs are having on the business. Notably Coca-Cola FEMSA. de's EBIT was pretty flat over the last year. We would prefer to see some earnings growth, because that always helps diminish debt. There's no doubt that we learn most about debt from the balance sheet. But ultimately the future profitability of the business will decide if Coca-Cola FEMSA. de can strengthen its balance sheet over time. So if you want to see what the professionals think, you might find this free report on analyst profit forecasts to be interesting.

Finally, a business needs free cash flow to pay off debt; accounting profits just don't cut it. So it's worth checking how much of that EBIT is backed by free cash flow. Over the last three years, Coca-Cola FEMSA. de recorded free cash flow worth a fulsome 84% of its EBIT, which is stronger than we'd usually expect. That puts it in a very strong position to pay down debt.

The good news is that Coca-Cola FEMSA. de's demonstrated ability to convert EBIT to free cash flow delights us like a fluffy puppy does a toddler. And its net debt to EBITDA is good too. All these things considered, it appears that Coca-Cola FEMSA. de can comfortably handle its current debt levels. On the plus side, this leverage can boost shareholder returns, but the potential downside is more risk of loss, so it's worth monitoring the balance sheet. Another positive for shareholders is that it pays dividends. So if you like receiving those dividend payments, check Coca-Cola FEMSA. de's dividend history, without delay!

If, after all that, you're more interested in a fast growing company with a rock-solid balance sheet, then check out our list of net cash growth stocks without delay.