Legendary fund manager Li Lu (who Charlie Munger backed) once said, 'The biggest investment risk is not the volatility of prices, but whether you will suffer a permanent loss of capital.' So it seems the smart money knows that debt - which is usually involved in bankruptcies - is a very important factor, when you assess how risky a company is. Importantly, CITIC Resources Holdings Limited (HKG:1205) does carry debt. But is this debt a concern to shareholders?

When Is Debt Dangerous?

Debt assists a business until the business has trouble paying it off, either with new capital or with free cash flow. Part and parcel of capitalism is the process of 'creative destruction' where failed businesses are mercilessly liquidated by their bankers. However, a more frequent (but still costly) occurrence is where a company must issue shares at bargain-basement prices, permanently diluting shareholders, just to shore up its balance sheet . Having said that, the most common situation is where a company manages its debt reasonably well - and to its own advantage. When we examine debt levels, we first consider both cash and debt levels, together.

Check out our latest analysis for CITIC Resources Holdings

What Is CITIC Resources Holdings's Debt? 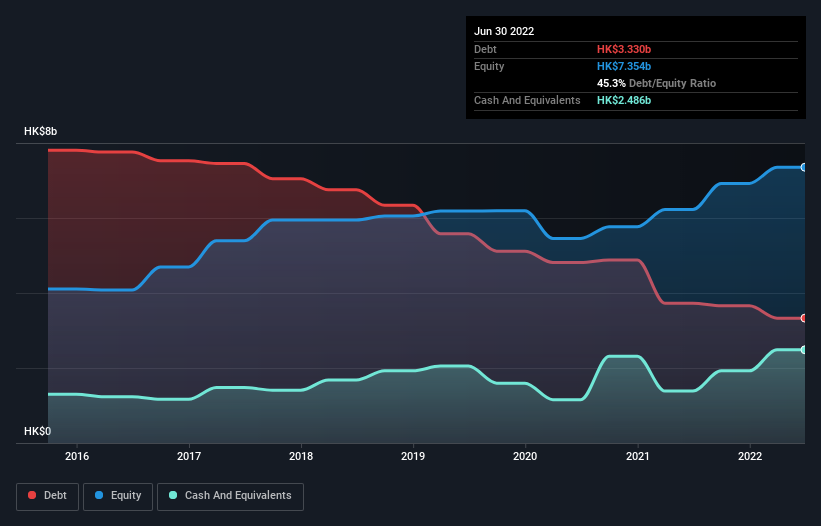 This is a mountain of leverage relative to its market capitalization of HK$3.22b. This suggests shareholders would be heavily diluted if the company needed to shore up its balance sheet in a hurry.

CITIC Resources Holdings has a low net debt to EBITDA ratio of only 0.43. And its EBIT covers its interest expense a whopping 29.8 times over. So you could argue it is no more threatened by its debt than an elephant is by a mouse. Even more impressive was the fact that CITIC Resources Holdings grew its EBIT by 538% over twelve months. If maintained that growth will make the debt even more manageable in the years ahead. When analysing debt levels, the balance sheet is the obvious place to start. But it is CITIC Resources Holdings's earnings that will influence how the balance sheet holds up in the future. So when considering debt, it's definitely worth looking at the earnings trend. Click here for an interactive snapshot.

But our final consideration is also important, because a company cannot pay debt with paper profits; it needs cold hard cash. So it's worth checking how much of that EBIT is backed by free cash flow. Over the last two years, CITIC Resources Holdings recorded free cash flow worth a fulsome 86% of its EBIT, which is stronger than we'd usually expect. That puts it in a very strong position to pay down debt.

CITIC Resources Holdings's interest cover suggests it can handle its debt as easily as Cristiano Ronaldo could score a goal against an under 14's goalkeeper. But, on a more sombre note, we are a little concerned by its level of total liabilities. Looking at the bigger picture, we think CITIC Resources Holdings's use of debt seems quite reasonable and we're not concerned about it. While debt does bring risk, when used wisely it can also bring a higher return on equity. There's no doubt that we learn most about debt from the balance sheet. However, not all investment risk resides within the balance sheet - far from it. For example, we've discovered 1 warning sign for CITIC Resources Holdings that you should be aware of before investing here.

When all is said and done, sometimes its easier to focus on companies that don't even need debt. Readers can access a list of growth stocks with zero net debt 100% free, right now.