Kiddieland International Limited's (HKG:3830) CEO Might Not Expect Shareholders To Be So Generous This Year

The results at Kiddieland International Limited (HKG:3830) have been quite disappointing recently and CEO Kenneth Lo bears some responsibility for this. At the upcoming AGM on 30 September 2022, shareholders can hear from the board including their plans for turning around performance. It would also be an opportunity for shareholders to influence management through voting on company resolutions such as executive remuneration, which could impact the firm significantly. From our analysis, we think CEO compensation may need a review in light of the recent performance.

Check out our latest analysis for Kiddieland International

How Does Total Compensation For Kenneth Lo Compare With Other Companies In The Industry?

At the time of writing, our data shows that Kiddieland International Limited has a market capitalization of HK$100m, and reported total annual CEO compensation of HK$2.2m for the year to April 2022. That's just a smallish increase of 5.7% on last year. We note that the salary portion, which stands at HK$1.99m constitutes the majority of total compensation received by the CEO.

In comparison with other companies in the industry with market capitalizations under HK$1.6b, the reported median total CEO compensation was HK$2.3m. From this we gather that Kenneth Lo is paid around the median for CEOs in the industry. 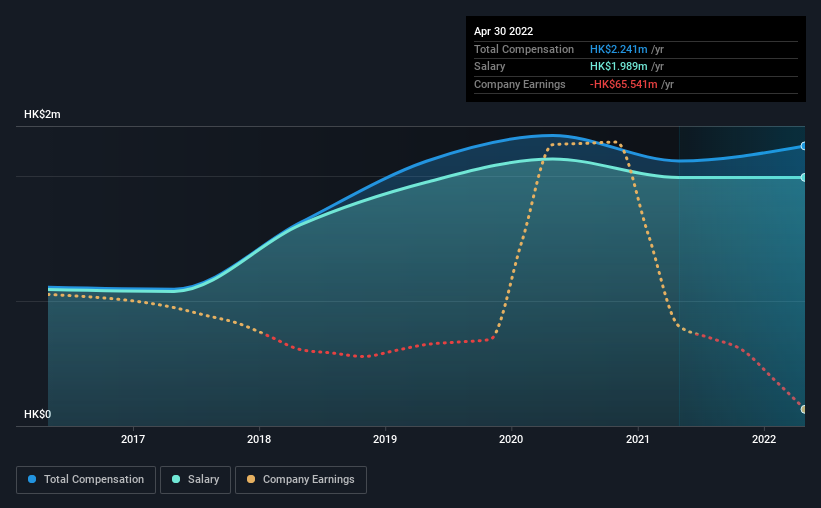 Over the last three years, Kiddieland International Limited has shrunk its earnings per share by 41% per year. Its revenue is down 19% over the previous year.

Few shareholders would be pleased to read that EPS have declined. And the impression is worse when you consider revenue is down year-on-year. It's hard to argue the company is firing on all cylinders, so shareholders might be averse to high CEO remuneration. We don't have analyst forecasts, but you could get a better understanding of its growth by checking out this more detailed historical graph of earnings, revenue and cash flow.

Has Kiddieland International Limited Been A Good Investment?

Given the total shareholder loss of 16% over three years, many shareholders in Kiddieland International Limited are probably rather dissatisfied, to say the least. This suggests it would be unwise for the company to pay the CEO too generously.

Along with the business performing poorly, shareholders have suffered with poor share price returns on their investments, suggesting that there's little to no chance of them being in favor of a CEO pay raise. At the upcoming AGM, management will get a chance to explain how they plan to get the business back on track and address the concerns from investors.

While it is important to pay attention to CEO remuneration, investors should also consider other elements of the business. That's why we did some digging and identified 1 warning sign for Kiddieland International that you should be aware of before investing .

Switching gears from Kiddieland International, if you're hunting for a pristine balance sheet and premium returns, this free list of high return, low debt companies is a great place to look.