Why Shoucheng Holdings' (HKG:697) Earnings Are Weaker Than They Seem

Even though Shoucheng Holdings Limited (HKG:697) posted strong earnings recently, the stock hasn't reacted in a large way. We think that investors might be worried about the foundations the earnings are built on.

Check out our latest analysis for Shoucheng Holdings 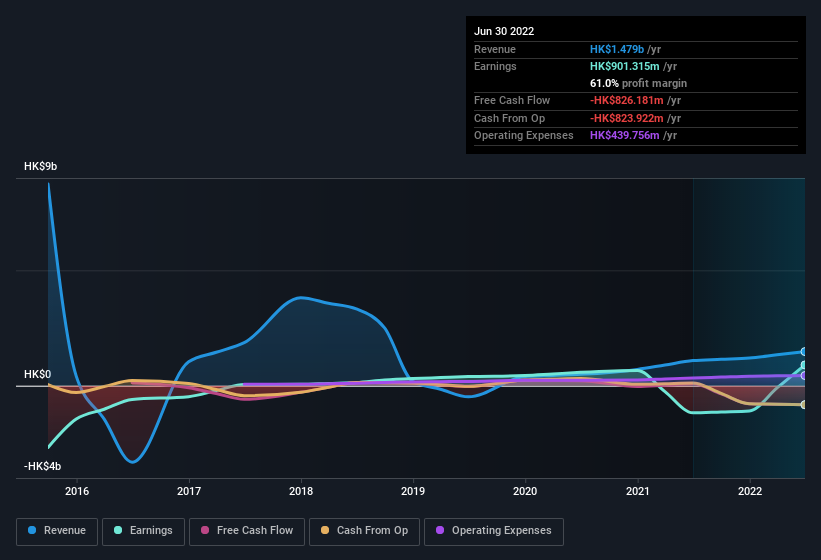 Zooming In On Shoucheng Holdings' Earnings

Many investors haven't heard of the accrual ratio from cashflow, but it is actually a useful measure of how well a company's profit is backed up by free cash flow (FCF) during a given period. To get the accrual ratio we first subtract FCF from profit for a period, and then divide that number by the average operating assets for the period. The ratio shows us how much a company's profit exceeds its FCF.

That means a negative accrual ratio is a good thing, because it shows that the company is bringing in more free cash flow than its profit would suggest. While having an accrual ratio above zero is of little concern, we do think it's worth noting when a company has a relatively high accrual ratio. To quote a 2014 paper by Lewellen and Resutek, "firms with higher accruals tend to be less profitable in the future".

Shoucheng Holdings has an accrual ratio of 0.27 for the year to June 2022. Unfortunately, that means its free cash flow fell significantly short of its reported profits. Even though it reported a profit of HK$901.3m, a look at free cash flow indicates it actually burnt through HK$826m in the last year. It's worth noting that Shoucheng Holdings generated positive FCF of HK$79m a year ago, so at least they've done it in the past. However, that's not all there is to consider. We can see that unusual items have impacted its statutory profit, and therefore the accrual ratio. The good news for shareholders is that Shoucheng Holdings' accrual ratio was much better last year, so this year's poor reading might simply be a case of a short term mismatch between profit and FCF. As a result, some shareholders may be looking for stronger cash conversion in the current year.

The Impact Of Unusual Items On Profit

The fact that the company had unusual items boosting profit by HK$254m, in the last year, probably goes some way to explain why its accrual ratio was so weak. While it's always nice to have higher profit, a large contribution from unusual items sometimes dampens our enthusiasm. We ran the numbers on most publicly listed companies worldwide, and it's very common for unusual items to be once-off in nature. And that's as you'd expect, given these boosts are described as 'unusual'. Shoucheng Holdings had a rather significant contribution from unusual items relative to its profit to June 2022. All else being equal, this would likely have the effect of making the statutory profit a poor guide to underlying earnings power.

Shoucheng Holdings had a weak accrual ratio, but its profit did receive a boost from unusual items. Considering all this we'd argue Shoucheng Holdings' profits probably give an overly generous impression of its sustainable level of profitability. If you want to do dive deeper into Shoucheng Holdings, you'd also look into what risks it is currently facing. When we did our research, we found 2 warning signs for Shoucheng Holdings (1 can't be ignored!) that we believe deserve your full attention.

Our examination of Shoucheng Holdings has focussed on certain factors that can make its earnings look better than they are. And, on that basis, we are somewhat skeptical. But there are plenty of other ways to inform your opinion of a company. For example, many people consider a high return on equity as an indication of favorable business economics, while others like to 'follow the money' and search out stocks that insiders are buying. So you may wish to see this free collection of companies boasting high return on equity, or this list of stocks that insiders are buying.