Howard Marks put it nicely when he said that, rather than worrying about share price volatility, 'The possibility of permanent loss is the risk I worry about... and every practical investor I know worries about.' So it might be obvious that you need to consider debt, when you think about how risky any given stock is, because too much debt can sink a company. We note that China Merchants Port Holdings Company Limited (HKG:144) does have debt on its balance sheet . But should shareholders be worried about its use of debt?

Why Does Debt Bring Risk?

Debt assists a business until the business has trouble paying it off, either with new capital or with free cash flow. Ultimately, if the company can't fulfill its legal obligations to repay debt, shareholders could walk away with nothing. However, a more usual (but still expensive) situation is where a company must dilute shareholders at a cheap share price simply to get debt under control. By replacing dilution, though, debt can be an extremely good tool for businesses that need capital to invest in growth at high rates of return. The first thing to do when considering how much debt a business uses is to look at its cash and debt together.

Check out our latest analysis for China Merchants Port Holdings

As you can see below, China Merchants Port Holdings had HK$35.1b of debt, at June 2022, which is about the same as the year before. You can click the chart for greater detail. On the flip side, it has HK$8.86b in cash leading to net debt of about HK$26.2b. 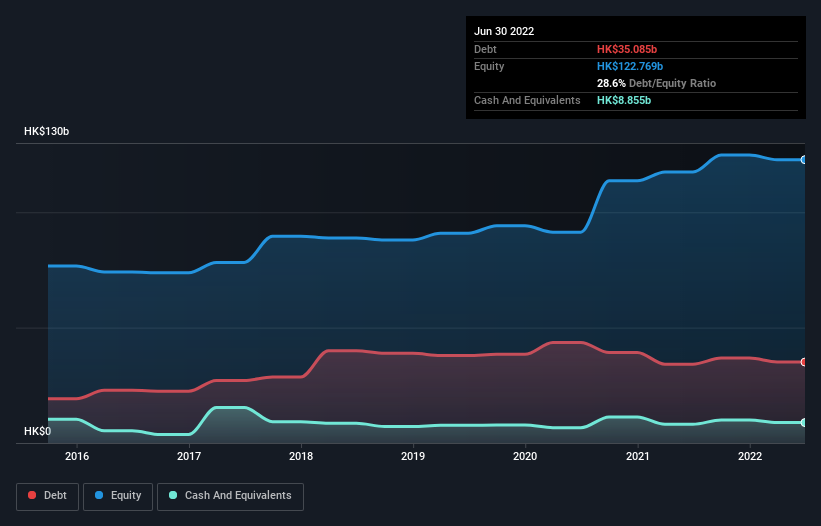 This deficit is considerable relative to its market capitalization of HK$46.2b, so it does suggest shareholders should keep an eye on China Merchants Port Holdings' use of debt. This suggests shareholders would be heavily diluted if the company needed to shore up its balance sheet in a hurry.

We use two main ratios to inform us about debt levels relative to earnings. The first is net debt divided by earnings before interest, tax, depreciation, and amortization (EBITDA), while the second is how many times its earnings before interest and tax (EBIT) covers its interest expense (or its interest cover, for short). This way, we consider both the absolute quantum of the debt, as well as the interest rates paid on it.

China Merchants Port Holdings's debt is 4.3 times its EBITDA, and its EBIT cover its interest expense 2.9 times over. This suggests that while the debt levels are significant, we'd stop short of calling them problematic. On the other hand, China Merchants Port Holdings grew its EBIT by 28% in the last year. If it can maintain that kind of improvement, its debt load will begin to melt away like glaciers in a warming world. There's no doubt that we learn most about debt from the balance sheet. But it is future earnings, more than anything, that will determine China Merchants Port Holdings's ability to maintain a healthy balance sheet going forward. So if you're focused on the future you can check out this free report showing analyst profit forecasts.

But our final consideration is also important, because a company cannot pay debt with paper profits; it needs cold hard cash. So the logical step is to look at the proportion of that EBIT that is matched by actual free cash flow. Over the last three years, China Merchants Port Holdings actually produced more free cash flow than EBIT. That sort of strong cash generation warms our hearts like a puppy in a bumblebee suit.

At the end of the day, it's often better to focus on companies that are free from net debt. You can access our special list of such companies (all with a track record of profit growth). It's free.