How Much Of Federal Agricultural Mortgage Corporation (NYSE:AGM) Do Institutions Own?

If you want to know who really controls Federal Agricultural Mortgage Corporation (NYSE:AGM), then you'll have to look at the makeup of its share registry. Institutions often own shares in more established companies, while it's not unusual to see insiders own a fair bit of smaller companies. Companies that used to be publicly owned tend to have lower insider ownership.

Federal Agricultural Mortgage isn't enormous, but it's not particularly small either. It has a market capitalization of US$1.2b, which means it would generally expect to see some institutions on the share registry. Taking a look at our data on the ownership groups (below), it seems that institutions are noticeable on the share registry. Let's delve deeper into each type of owner, to discover more about Federal Agricultural Mortgage.

Check out our latest analysis for Federal Agricultural Mortgage

What Does The Institutional Ownership Tell Us About Federal Agricultural Mortgage?

Institutions typically measure themselves against a benchmark when reporting to their own investors, so they often become more enthusiastic about a stock once it's included in a major index. We would expect most companies to have some institutions on the register, especially if they are growing.

As you can see, institutional investors have a fair amount of stake in Federal Agricultural Mortgage. This implies the analysts working for those institutions have looked at the stock and they like it. But just like anyone else, they could be wrong. It is not uncommon to see a big share price drop if two large institutional investors try to sell out of a stock at the same time. So it is worth checking the past earnings trajectory of Federal Agricultural Mortgage, (below). Of course, keep in mind that there are other factors to consider, too. 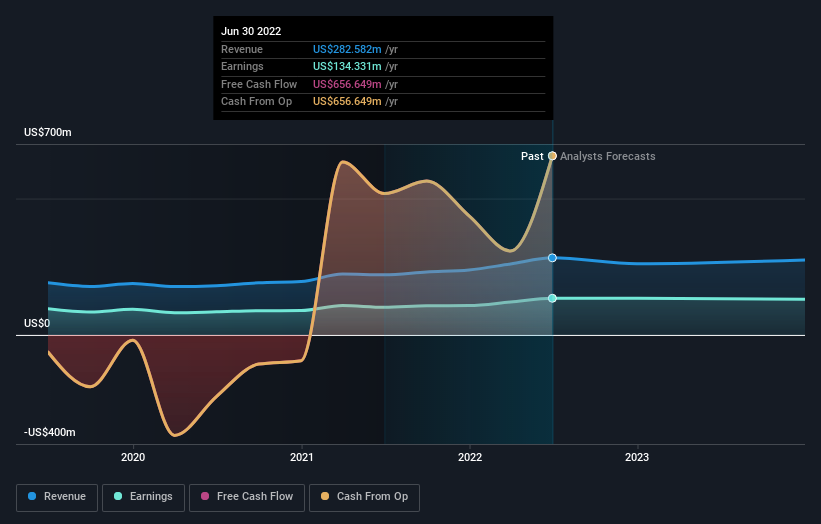 Since institutional investors own more than half the issued stock, the board will likely have to pay attention to their preferences. Hedge funds don't have many shares in Federal Agricultural Mortgage. The company's largest shareholder is BlackRock, Inc., with ownership of 14%. The Vanguard Group, Inc. is the second largest shareholder owning 5.1% of common stock , and Dimensional Fund Advisors LP holds about 4.2% of the company stock.

While it makes sense to study institutional ownership data for a company, it also makes sense to study analyst sentiments to know which way the wind is blowing. There is a little analyst coverage of the stock, but not much. So there is room for it to gain more coverage.

While the precise definition of an insider can be subjective, almost everyone considers board members to be insiders. Company management run the business, but the CEO will answer to the board, even if he or she is a member of it.

Most consider insider ownership a positive because it can indicate the board is well aligned with other shareholders. However, on some occasions too much power is concentrated within this group.

We can report that insiders do own shares in Federal Agricultural Mortgage Corporation. It is a pretty big company, so it is generally a positive to see some potentially meaningful alignment. In this case, they own around US$17m worth of shares (at current prices). If you would like to explore the question of insider alignment, you can click here to see if insiders have been buying or selling.

The general public-- including retail investors -- own 21% stake in the company, and hence can't easily be ignored. This size of ownership, while considerable, may not be enough to change company policy if the decision is not in sync with other large shareholders.

We can see that Private Companies own 4.5%, of the shares on issue. Private companies may be related parties. Sometimes insiders have an interest in a public company through a holding in a private company, rather than in their own capacity as an individual. While it's hard to draw any broad stroke conclusions, it is worth noting as an area for further research.

I find it very interesting to look at who exactly owns a company. But to truly gain insight, we need to consider other information, too. Consider risks, for instance. Every company has them, and we've spotted 1 warning sign for Federal Agricultural Mortgage you should know about.

But ultimately it is the future, not the past, that will determine how well the owners of this business will do. Therefore we think it advisable to take a look at this free report showing whether analysts are predicting a brighter future.

NB: Figures in this article are calculated using data from the last twelve months, which refer to the 12-month period ending on the last date of the month the financial statement is dated. This may not be consistent with full year annual report figures.

This presentation is for informational and educational use only and is not a recommendation or endorsement of any particular investment or investment strategy. Investment information provided in this content is general in nature, strictly for illustrative purposes, and may not be appropriate for all investors. It is provided without respect to individual investors’ financial sophistication, financial situation, investment objectives, investing time horizon, or risk tolerance. You should consider the appropriateness of this information having regard to your relevant personal circumstances before making any investment decisions. Past investment performance does not indicate or guarantee future success. Returns will vary, and all investments carry risks, including loss of principal.

Moomoo is a financial information and trading app offered by Moomoo Techonologies Inc.