What Type Of Shareholders Own The Most Number of China Railway Group Limited (SHSE:601390) Shares?

If you want to know who really controls China Railway Group Limited (SHSE:601390), then you'll have to look at the makeup of its share registry. Large companies usually have institutions as shareholders, and we usually see insiders owning shares in smaller companies. We also tend to see lower insider ownership in companies that were previously publicly owned.

China Railway Group has a market capitalization of CN¥130b, so it's too big to fly under the radar. We'd expect to see both institutions and retail investors owning a portion of the company. Taking a look at our data on the ownership groups (below), it seems that institutional investors have bought into the company. Let's take a closer look to see what the different types of shareholders can tell us about China Railway Group.

Check out our latest analysis for China Railway Group

What Does The Institutional Ownership Tell Us About China Railway Group?

Institutions typically measure themselves against a benchmark when reporting to their own investors, so they often become more enthusiastic about a stock once it's included in a major index. We would expect most companies to have some institutions on the register, especially if they are growing.

China Railway Group already has institutions on the share registry. Indeed, they own a respectable stake in the company. This suggests some credibility amongst professional investors. But we can't rely on that fact alone since institutions make bad investments sometimes, just like everyone does. When multiple institutions own a stock, there's always a risk that they are in a 'crowded trade'. When such a trade goes wrong, multiple parties may compete to sell stock fast. This risk is higher in a company without a history of growth. You can see China Railway Group's historic earnings and revenue below, but keep in mind there's always more to the story. 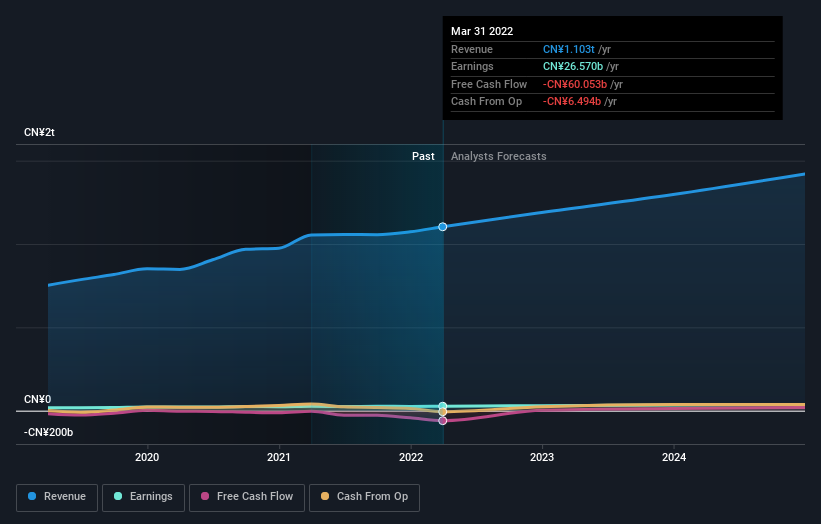 We note that hedge funds don't have a meaningful investment in China Railway Group. Looking at our data, we can see that the largest shareholder is China Railway Engineering Group Company Limited with 47% of shares outstanding. China Securities Finance Corp, Asset Management Arm is the second largest shareholder owning 2.5% of common stock, and China Reform Holdings Corporation Ltd. holds about 1.6% of the company stock.

To make our study more interesting, we found that the top 3 shareholders have a majority ownership in the company, meaning that they are powerful enough to influence the decisions of the company.

Researching institutional ownership is a good way to gauge and filter a stock's expected performance. The same can be achieved by studying analyst sentiments. Quite a few analysts cover the stock, so you could look into forecast growth quite easily.

While the precise definition of an insider can be subjective, almost everyone considers board members to be insiders. The company management answer to the board and the latter should represent the interests of shareholders. Notably, sometimes top-level managers are on the board themselves.

I generally consider insider ownership to be a good thing. However, on some occasions it makes it more difficult for other shareholders to hold the board accountable for decisions.

Our data cannot confirm that board members are holding shares personally. Not all jurisdictions have the same rules around disclosing insider ownership, and it is possible we have missed something, here. So you can click here learn more about the CEO.

With a 32% ownership, the general public, mostly comprising of individual investors, have some degree of sway over China Railway Group. While this group can't necessarily call the shots, it can certainly have a real influence on how the company is run.

Our data indicates that Private Companies hold 49%, of the company's shares. Private companies may be related parties. Sometimes insiders have an interest in a public company through a holding in a private company, rather than in their own capacity as an individual. While it's hard to draw any broad stroke conclusions, it is worth noting as an area for further research.

I find it very interesting to look at who exactly owns a company. But to truly gain insight, we need to consider other information, too. Take risks for example - China Railway Group has 2 warning signs (and 1 which is a bit concerning) we think you should know about.

If you are like me, you may want to think about whether this company will grow or shrink. Luckily, you can check this free report showing analyst forecasts for its future.

NB: Figures in this article are calculated using data from the last twelve months, which refer to the 12-month period ending on the last date of the month the financial statement is dated. This may not be consistent with full year annual report figures.